Persuasion was the last novel written by Jane Austen, although it wasn’t published until after the author’s death.The story Persuasion is about a young 27 year old Englishwoman, Anne Elliot. Anne’s family moves to lower their expenses and reduce their debt by renting their home to an Admiral and his wife. The wife's brother, Navy Captain Frederick Wentworth, was engaged to Anne in 1806, but the engagement was broken. Anne and Captain Wentworth, both single and unattached, meet again after a seven-year separation, setting the scene for many humorous encounters as well as a second, well-considered chance at love and marriage for Anne in her second "bloom". Pride and Prejudice is a novel of manners by Jane Austen, first published in 1813. The story follows the main character, Elizabeth Bennet, as she deals with issues of manners, upbringing, morality, education, and marriage in the society of the landed gentry of the British Regency. Elizabeth is the second of five daughters of a country gentleman living near the fictional town of Meryton in Hertfordshire, near London.

Set in England in the early 19th century, Pride and Prejudice tells the story of Mr and Mrs Bennet's five unmarried daughters after the rich and eligible Mr Bingley and his status-conscious friend, Mr Darcy, have moved into their neighbourhood. While Bingley takes an immediate liking to the eldest Bennet daughter, Jane, Darcy has difficulty adapting to local society and repeatedly clashes with the second-eldest Bennet daughter, Elizabeth.

Though Austen set the story at the turn of the 19th century, it retains a fascination for modern readers, continuing near the top of lists of "most loved books." It has become one of the most popular novels in English literature, selling over 20 million copies, and receives considerable attention from literary scholars. Modern interest in the book has resulted in a number of dramatic adaptations and an abundance of novels and stories imitating Austen's memorable characters or themes. 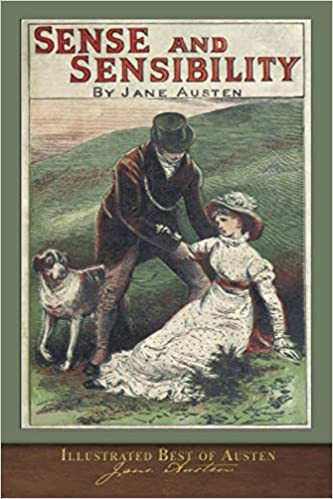 Sense and Sensibility is a novel by Jane Austen, initially published anonymously in 1811. It tells the story of the Dashwood sisters, Elinor and Marianne as they come of age. They have an older, stingy half-brother, John, and a younger sister, Margaret. The novel follows the three Dashwood sisters as they must move with their widowed mother from the estate on which they grew up, Norland Park. Because Norland is passed down to John, the product of Mr. Dashwood's first marriage, and his young son, the four Dashwood women need to look for a new home. They have the opportunity to rent a modest home, Barton Cottage, on the property of a distant relative, Sir John Middleton. There they experience love, romance, and heartbreak.