Growing up, we all call melodious sounds hitting our ears ‘music.’ Music, we later learn, is one piece of the quadrivium in classical education. We think we understand, until some explanations of music and classical education seem to make music about so much more than sound that the harmonious sound element is almost eclipsed.

We asked musician and president of New College Franklin, Greg Wilbur, on the show to talk about the place of literal music in classical education.

Brandy Vencel,
homeschool mom of four, did voice training in college and was her children’s first piano teacher.

Mystie Winckler,
homeschool mom of five, never took any music lessons, but her children are making up for that now.

Gregory Wilbur is founder and president of New College Franklin—a Christian college that concentrates on the classics and the seven liberal arts with a discussion-based approach and spiritual formation.

In addition to teaching and developing curriculum, his current academic focus is advancing the disciplines of the Quadrivium by bringing together leading voices in its renewal. He has contributed to nine books, numerous publications and on-line sites, and is the author of Glory and Honor: The Music and Artistic Legacy of Johann Sebastian Bach.

As an award-winning musician, he has released seven albums of his compositions of congregational psalms, hymns and service music as well as theatrical musicals and film scores, and his hymns can be found in more than ten hymnals.

Having taught for almost thirty years, he is a frequent speaker on music, the Quadrivium, arts, liturgy, and worship and serves as Chief Musician and liturgist at Cornerstone Presbyterian Church in Franklin, TN. He, his wife, Sophia, and daughter, Eleanor, enjoy travel, reading, cooking, taking walks and life in middle Tennessee.

“As much as possible, have a musical home.” 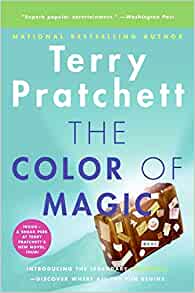 Mystie is listening to this book to try to get a leg up on her understanding of Marx for the Excellent Marxmanship study inside Sistership.

The Jazz of Physics, Stephen Alexander

Greg is reading an analysis of a more complex view of the music of the spheres and how physics and jazz share principles.

The Colour of Magic, Terry Pratchet

Brandy decided to give Pratchet’s discworld another try by going to the beginning of the series.

Why is music more than music in classical education?

Because we have really lost the quadrivium, we have a shortsighted view of music. What is music and what is it for? Cultural shifts have changed what we value and what we ask about with regard to art such as music.

The older, pre-enlightenment interest with music was how it reflected the order of the cosmos. Not only might music reflect cosmic order, but it might even have a role in maintaining it. Music could create harmony or discord not only in people’s ears but also in the world itself.

Is there older music than Bach?

The older music is much more vocal and liturgical, which are less valued today. Such music has a different purpose and emphasis. Its priorities don’t align with post-enlightenment values.

Concert symphonies actually utilize and demonstrate a Hegelian mode of thinking as they counter a theme with a contrary theme and come out of it with a synthesis. Classical music reflects enlightenment values.

What is the role of music?

Liberal Arts Tradition points to the role of music in early education, before it’s a quadrivium study. In early education, music is paired with gymnastic, giving us training for the soul and body. Music here provides education in the muses – the enculturating elements all of which are daughters of memory.

From a foundational base in a grounding education via music (including all the arts) and gymnastic, a student is able to encounter and understand the liberal arts, the trivium and quadrivium. Music in early education grounds the student in love first.

Astronomy, like music, shows up as one of the daughters of the muses, appropriate for enculturation, as well as a liberal art, productive of knowledge.

At New College Franklin, quadrivium studies in music are called harmonia rather than music to communicate the purpose of the art.

In Boethius’ book on music, he does speak of music as a heard thing, yet also talks about its ethical quality. He talks about three kinds of music: music of the world or the cosmos, instrumental music, and music of the soul.

The older philosophers considered heard music the least of the kinds of music. It is a technical skill to play an instrument, but it is virtue to be harmonious within one’s soul.

Tension is required for music and harmony, which teaches us about reality.

How do we homeschool music well?

Any instrument instruction or music appreciation is valuable and a step in the right direction. We don’t have to comprehend the history and philosophy of music to begin.

The difference between music as a mere skill to learn and a classical approach to music isn’t that you really do much differently, but that you have a different motive and goal, a different vision and purpose.

Music is so large a subject, even just heard music. There is music theory and music technical skill and musicality.

Exposure breeds taste and growing desire. By being read to, children learn that they might want to read themselves. It is the same with music. Listening to music and singing and weaving music into our lives will foster a desire to know music as a personal skill also.

To do and know music, you really should know how to read music, not simply play by ear. Reading is as important a skill in music as in reading words. By reading music, we sing more skillfully and in harmony.

As long as we live there is never enough singing.

Learning to sing or learning an instrument solo is a good skill, but a much deeper application is required to play alongside others. It is an added kind of harmony to sing in a choir, to play in a band, to dance in a set.

Even sibling duets show how sanctification is a kind of harmony best produced in community. We talk about the trivium, about a liberal arts education, about classical education, but often without being clear about what these terms mean. When we do have a definition, it is usually simplified. Sometimes, it’s not at all tethered to the actual historical usage or concept. In this episode, we talk to historian Dr. Schlect,…
Read More SS #95: What are the liberal arts? (with Dr. Chris Schlect!!) We’re thrilled to have Ravi Jain back on the show today. Obviously, Ravi is co-author of the fabulous book, The Liberal Arts Tradition, but let me tell you a little more about him. Ravi Jain graduated from Davidson College, received an M.A. from Reformed Theological Seminary, and later earned a Graduate Certificate in Mathematics from…
Read More SS #62: The Scholé Sisters Go Liberal (with Ravi Jain!) Our special guest today is one of our favorite people, Karen Glass! Karen Glass has been homeschooling her children for 25 years, and she’s not quite finished yet. She is one of the founders of the AmblesideOnline curriculum project and has delved deeply into Charlotte Mason’s philosophy of education. She has lived in Poland, where… Sometimes we think we have to be smart and knowledgeable to learn. We know we aren’t, so we attribute our difficulty or resistance to learning to not being good enough. However, that’s exactly the acknowledgement we need to make before we can learn! Humility is not a hindrance to learning. It’s the prerequisite required to… Today’s discussion is all about giving ourselves the classical education we never received. That’s was Susan Wise Bauer’s book, The Well-Educated Mind, is all about, and it’s why we knew she was the perfect person to discuss this with. You are going to LOVE listening to her! Listen to the podcast: TUNE IN: Apple Podcasts |… For today’s episode, we had quite the discussion surrounding the idea of interest and being interested – what does it mean, are we born interested, how do we lose interest over time, how do we gain it, what do we do when our children aren’t interested? We talked about a lot!   Thank you to… In today’s episode, Mystie and Brandy use Aristotle’s Nichomachean Ethics to discuss the connection between habits and virtue, and then proceed to convince themselves to work on shoring up good habits over the summer to pave the way for a better school year. They talk about different types of habits to build, as well as how… This is, however, a fantastic conversation we had with Abby in which we jump off of Neil Postman’s thoughts on the need to not just take in information, but also take action, and apply this to the reading and thinking we do in our scholé time.